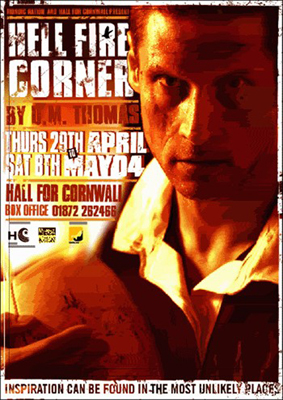 My first and only stage play. I found it thrilling to work with a company. My friend, and experienced director and playwright Marie Macneill, took the text in hand and, over many a pub lunch, we licked it into shape. Her company Mundic Nation co-produced it with the Hall for Cornwall.

It's about an illiterate Redruth miner who, a century ago, became a god to the Cornish as he was the monarch of rugby centre three-quarters. He played only once for England, because he turned down further invitations, feeling socially inept. I go deeply into my roots in this play --which The Stage reviewer described flatteringlyas 'this mighty play'. It moved people anyway, even if it's a bit 'oldfashioned; in theatrical terms.

It's high time it was produced again!