Alexander Solzhenitsyn: A Century in His Life
(St Martins, 1998)

Winner of the Orwell Prize. I hate the pain of research, and knew this would be an immense undertaking. My commissioning editor in the USA told me if it was less than 200,000 words long Americans would consider it an essay not a book! I wrote it because I revere Solzhenitsyn and I saw his long life as a way in which I could express my feelings for Russia and its writers.
As I wrote it I so missed writing creatively that I included three paragraphs which are pure fiction. Not significant additions, I should add! No one has spotted them.

Solzhenitsyn did not want to be interviewed (I don't blame him). But I was pleased that his wife invited me to speak at his 90th birthday celebrations. It showed, I think, that he felt I had been fair and just. Unfortunately he died before his birthday.

''This is not A book about Solzhenitsyn, it is THE book... Reads like a great Russian novel... It is difficult to think of a literary biography that has impressed me more.'
--A.N.Wilson, Literary Review

'Written with the verve of an exciting thriller... manages to bring the man to life in a way that no one else has ever done before.'
--Orlando Figes, The Times 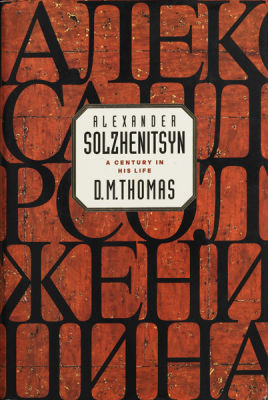