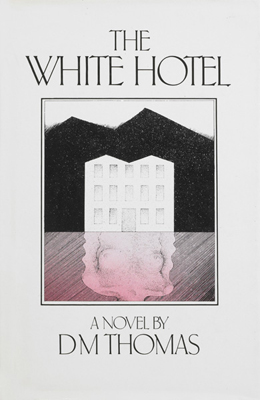 An unexpected bestseller, it won the Los Angeles Times Fiction Prize, the Cheltenham Prize and the P.E.N. Prize, and was a Booker nomination. It was No.1 bestseller in the UK for six successive weeks, and No.2 in the USA. It has been translated into 30 languages worldwide.
Not for the squeamish!

An incredible number of synchronicities are connected to its writing. And later too. Fire, for instance. I was staying high-up in a skyscraper hotel in Manhattan, a year or so after publication; next day I was due to lecture on it to the Albert Einstein Foundation (I think). In the night I was woken by what sounded like gunfire outside; could have been a Chicago Mafia war of the 1920's. I pulled the curtains aside, and saw a skyscraper ablaze about thirty storeys up, level with me, and close! Unnerving. I expected to see people jumping, but no one did. I dressed hurriedly and took the lift down to the lobby.
Turned out it was the Trump Tower, still under construction, so no one hurt.
Then later the actress Ruth Rosen was performing a version of the novel in Toronto when the neighbouring building caught fire.
Well, of course, fires happen, but it's part of a chain of weird coincidences.

Much more significant ones occurred to me while writing it. Needing to find a Freud-like quote from Goethe, I picked up my Penguin Book of German Verse, turned to Goethe, and immediately hit on a suitable one. Much later, I found that Freud had used that very quote. I was half-pleased, half-disappointed --people might have thought I had just pinched it from him!
Just as I was coming up to my opera-rehearsal episode --'Onegin'-- and reflecting ruefully that I'd never seen that opera and never been in an operatic rehearsal, I had a phonecall from a composer asking me if I could interpret for a Russian conductor who was holding Onegin rehearsals with the Welsh National Opera. I said yes, even though I knew my spoken Russian was totally inadequate. I was sacked after my first day, but I'd seen an opera rehearsal!
Finally, when I went to Milan to launch the Italian publication, I was signing in at the hotel when my publicity director told me that the great Russian soprano Galina Vishnevskaya was also signing the register. Presumably she was coming to sing at La Scala. Vishnevskaya had been, in part, my 'model' for my fictional diva, Serebryakova, whom Lisa replaces at La Scala.

'To describe this novel as spine-tingling in its indescribable poetic effect would be to trivialise its tragic theme. say then that it is heart-stunning.'
--New York Times.

'Utterly original in form and theme. It stands alone.'
Graham Greene, Books of the Year.